Anuj Bhagwaticompleted his B.S. (Engineering Physics) with distinction (1991) and M.S. (Applied Physics) (1994) – both from Cornell University, USA. Mr Bhagwati, who now heads the A.T.E. Group, joined the Group in 1994. He has been actively involved in a wide range of activities in the group: he introduced IT to the group, managed several companies, put together joint ventures, and has been a part of divestments, turnarounds, start-ups and scale-ups. In the process he has transformed A.T.E. into a modern and technology oriented group.Under the leadership of Mr Bhagwati, the group has diversified into machine-to-machine solutions and clean technology. The group’s foray into clean technology reflects Mr Bhagwati’s personal commitment to the environment.Mr Bhagwati has been involved over the last decade with the Textile Machinery Manufacturers’ Association (TMMA), India and was the Chairman for the years 2009-2011. He is deeply involved with various non-profit bodies as well, such as the Urban Design Research Institute (Trustee), and the Kala Ghoda Association (Committee member); and he is a co-founder and Trustee of the Praja Foundation. Since 2012, he is a member of the Advisory Council of the College of Architecture Art and Planning of Cornell University, USA. He is a Trustee of the K J Somaiya Trust, and a member of the Governing Council, K J Somaiya College of Engineering and member of Academic Council, Somaiya Vidyavihar.
Dr Vivek K Soniis an independent consultant focused on cleantech investment and business strategy. From 2001 to 2004, he was President, Corporate Technology Strategy and Services, at the Aditya Birla Group (revenues of $ 8.3 Billion), an India based manufacturing and services conglomerate with operations within and outside India. Prior to joining the Aditya Birla Group, Dr Soni was Director, Science & Technology, at Polaroid Corporation, where he worked from 1987 to 2001. Dr Soni started his career in 1985 at Shell Development Company, a Royal Dutch/Shell Group Company in Houston, TX.He is a member of TiE Boston and has an excellent network in India and in the financial, business and technical communities in the US. Dr Soni received his Ph.D. from the University of Massachusetts, Amherst and a B. Tech. from the Indian Institute of Technology, New Delhi, India. He attended the Executive Development Program at the Kellogg School of Management at Northwestern University.
Heindl Franz joined HUBER after completing his degree as mechanical engineer at the University of Applied Sciences, Regensburg in 1995. After gathering experience in several departments of HUBER, he took over the market development for the Asia-Pacific Region in 1997 and subsequently moved to Singapore, where he set up a Representative Office for HUBER in 2000. 2002 followed the founding of HUBER Technology Asia Pacific Pte Ltd, which he headed as Managing Director till 2011. After moving back to Germany, he took over the position as Director of International Sales at HUBER SE and is now in charge of all sales activities of HUBER in the international markets. Additionally he is acting Board Member for the HUBER Subsidiaries in Asia-Pacific and Russia.
Bhushan Zarapkar an Environmental Engineer, founded his own environmental firm (Alps Environmental Technologies, subsequently known as A.T.E. Envirotech) in the year 2000 after a decade of experience as an environmental engineer. Under his guidance, the firm has executed more than 300 projects in India and across the globe and thus built up extensive experience in the field of wastewater treatment. Mr Zarapkar also did his Executive MBA from IIT Bombay and Washington University in St. Louis, USA.
Georg Huber After finalising his degree in business administration at the Anglia Ruskin University, Cambridge, in 2001, Mr Georg Huber joined Huber and first gathered experience in the sales department, helping develop the Latin American market for the company. In 2006, he became head of the financial department and joined the board of directors in 2008. Since 2010, he has served as CEO of the company.
Nikesh Jain is an Associate Member of the Institute of Chartered Accountants of India. He has over 25 years of experience, beginning in the lifestyle and retail industry, spanning across functions such as corporate accounts, business planning, investor relations, IPR, legal and commercial, administration, and HR. Nikesh joined A.T.E. in July 2007 and is responsible for group finances, projects, joint ventures, and general management of the group.
WordPress Video Lightbox
Contact Us 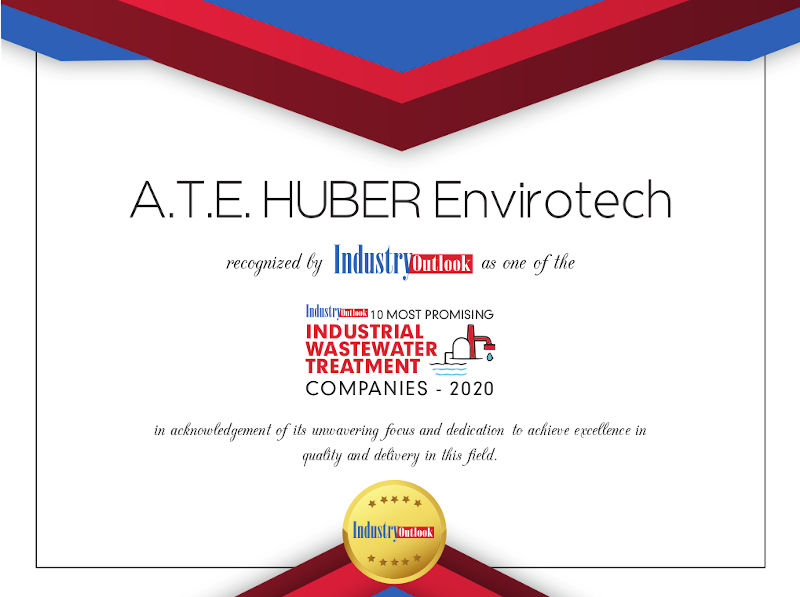 We provide this link to Google Translate as a courtesy to visitors to the A.T.E. HUBER Envirotech website. We do not own, manage or control any aspect of Google Translate and are not responsible for the translations provided by Google Translate. We do not make any promises, assurances, or guarantees as to the accuracy, reliability, or timeliness of the translations provided. We can only verify the validity and accuracy of the information provided in English and because of this, the English version of our website is the official text. Viewers who rely on information through Google Translate on our website do so at their own risk. We shall not be liable for any inaccuracies or errors or offensive language in the translation and shall not accept liability for any loss, damage, or other problem, including without limitation, indirect or consequential loss or damage arising from or in connection with use of the Google Translate Service. By using Google Translate, you understand and agree to this disclaimer. If there are any concerns regarding the accuracy of the information presented within the translated versions of our site, please refer back to the official English language website.